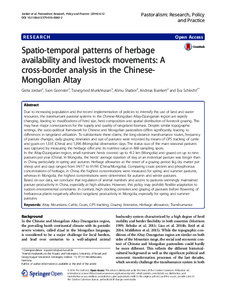 Spatio-temporal patterns of herbage availability and livestock movements: A cross-border analysis in the Chinese-Mongolian Altay

Due to increasing population and the recent implementation of policies to intensify the use of land and water resources, the transhumant pastoral systems in the Chinese-Mongolian Altay-Dzungarian region are rapidly changing, leading to modifications of herd size, herd composition and spatial distribution of livestock grazing. This may have major consequences for the supply and quality of rangeland biomass. Despite similar topographic settings, the socio-political framework for Chinese and Mongolian pastoralists differs significantly, leading to differences in rangeland utilization. To substantiate these claims, the long-distance transhumance routes, frequency of pasture changes, daily grazing itineraries and size of pastures were recorded by means of GPS tracking of cattle and goats on 1,535 (China) and 1,396 (Mongolia) observation days. The status quo of the main seasonal pastures was captured by measuring the herbage offer and its nutritive value in 869 sampling spots.

In the Altay-Dzungarian region, small ruminant herds covered up to 412 km (Mongolia) and grazed on up to nine pastures per year (China). In Mongolia, the herds’ average duration of stay at an individual pasture was longer than in China, particularly in spring and autumn. Herbage allowance at the onset of a grazing period (kg dry matter per sheep unit and day) ranged from 34/17 to 91/95 (China/Mongolia). Comparing crude protein and phosphorous concentrations of herbage, in China, the highest concentrations were measured for spring and summer pastures, whereas in Mongolia, the highest concentrations were determined for autumn and winter pastures.

Based on our data, we conclude that regulation of animal numbers and access to pastures seemingly maintained pasture productivity in China, especially at high altitudes. However, this policy may prohibit flexible adaptation to sudden environmental constraints. In contrast, high stocking densities and grazing of pastures before flowering of herbaceous plants negatively affected rangeland productivity in Mongolia, especially for spring and summer pastures.