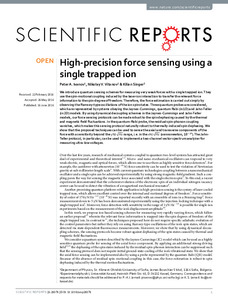 We introduce quantum sensing schemes for measuring very weak forces with a single trapped ion. They use the spin-motional coupling induced by the laser-ion interaction to transfer the relevant force information to the spin-degree of freedom. Therefore, the force estimation is carried out simply by observing the Ramsey-type oscillations of the ion spin states. Three quantum probes are considered, which are represented by systems obeying the Jaynes-Cummings, quantum Rabi (in 1D) and Jahn-Teller (in 2D) models. By using dynamical decoupling schemes in the Jaynes-Cummings and Jahn-Teller models, our force sensing protocols can be made robust to the spin dephasing caused by the thermal and magnetic field fluctuations. In the quantum-Rabi probe, the residual spin-phonon coupling vanishes, which makes this sensing protocol naturally robust to thermally-induced spin dephasing. We show that the proposed techniques can be used to sense the axial and transverse components of the force with a sensitivity beyond the yN/\wurzel{Hz}range, i.e. in the xN/\wurzel{Hz}(xennonewton, 10^−27). The Jahn-Teller protocol, in particular, can be used to implement a two-channel vector spectrum analyzer for measuring ultra-low voltages.