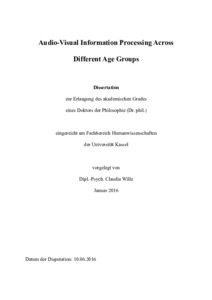 People possess different sensory modalities to detect, interpret, and efficiently act upon various events in a complex and dynamic environment (Fetsch, DeAngelis, & Angelaki, 2013). Much empirical work has been done to understand the interplay of modalities (e.g. audio-visual interactions, see Calvert, Spence, & Stein, 2004). On the one hand, integration of multimodal input as a functional principle of the brain enables the versatile and coherent perception of the environment (Lewkowicz & Ghazanfar, 2009). On the other hand, sensory integration does not necessarily mean that input from modalities is always weighted equally (Ernst, 2008). Rather, when two or more modalities are stimulated concurrently, one often finds one modality dominating over another. Study 1 and 2 of the dissertation addressed the developmental trajectory of sensory dominance. In both studies, 6-year-olds, 9-year-olds, and adults were tested in order to examine sensory (audio-visual) dominance across different age groups. In Study 3, sensory dominance was put into an applied context by examining verbal and visual overshadowing effects among 4- to 6-year olds performing a face recognition task. The results of Study 1 and Study 2 support default auditory dominance in young children as proposed by Napolitano and Sloutsky (2004) that persists up to 6 years of age. For 9-year-olds, results on privileged modality processing were inconsistent. Whereas visual dominance was revealed in Study 1, privileged auditory processing was revealed in Study 2. Among adults, a visual dominance was observed in Study 1, which has also been demonstrated in preceding studies (see Spence, Parise, & Chen, 2012). No sensory dominance was revealed in Study 2 for adults. Potential explanations are discussed. Study 3 referred to verbal and visual overshadowing effects in 4- to 6-year-olds. The aim was to examine whether verbalization (i.e., verbally describing a previously seen face), or visualization (i.e., drawing the seen face) might affect later face recognition. No effect of visualization on recognition accuracy was revealed. As opposed to a verbal overshadowing effect, a verbal facilitation effect occurred. Moreover, verbal intelligence was a significant predictor for recognition accuracy in the verbalization group but not in the control group. This suggests that strengthening verbal intelligence in children can pay off in non-verbal domains as well, which might have educational implications.