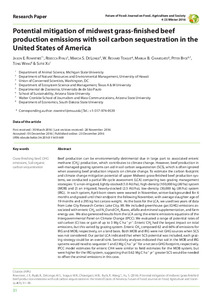 Beef production can be environmentally detrimental due in large part to associated enteric methane (CH4) production, which contributes to climate change. However, beef production in well-managed grazing systems can aid in soil carbon sequestration (SCS), which is often ignored when assessing beef production impacts on climate change. To estimate the carbon footprint and climate change mitigation potential of upper Midwest grass-finished beef production systems, we conducted a partial life cycle assessment (LCA) comparing two grazing management strategies: 1) a non-irrigated, lightly-stocked (1.0 AU/ha), high-density (100,000 kg LW/ha) system (MOB) and 2) an irrigated, heavily-stocked (2.5 AU/ha), low-density (30,000 kg LW/ha) system (IRG). In each system, April-born steers were weaned in November, winter-backgrounded for 6 months and grazed until their endpoint the following November, with average slaughter age of 19 months and a 295 kg hot carcass weight. As the basis for the LCA, we used two years of data from Lake City Research Center, Lake City, MI. We included greenhouse gas (GHG) emissions associated with enteric CH4, soil N2O and CH4 fluxes, alfalfa and mineral supplementation, and farm energy use. We also generated results from the LCA using the enteric emissions equations of the Intergovernmental Panel on Climate Change (IPCC). We evaluated a range of potential rates of soil carbon (C) loss or gain of up to 3 Mg C ha-1 yr-1. Enteric CH4 had the largest impact on total emissions, but this varied by grazing system. Enteric CH4 composed 62 and 66% of emissions for IRG and MOB, respectively, on a land basis. Both MOB and IRG were net GHG sources when SCS was not considered. Our partial LCA indicated that when SCS potential was included, each grazing strategy could be an overall sink. Sensitivity analyses indicated that soil in the MOB and IRG systems would need to sequester 1 and 2 Mg C ha-1 yr-1 for a net zero GHG footprint, respectively. IPCC model estimates for enteric CH4 were similar to field estimates for the MOB system, but were higher for the IRG system, suggesting that 0.62 Mg C ha-1 yr-1 greater SCS would be needed to offset the animal emissions in this case.