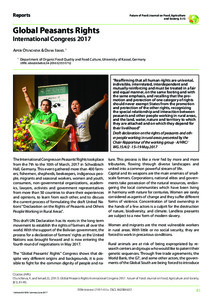 “Reaffirming that all human rights are universal,
indivisible, interrelated, interdependent and mutually reinforcing and must be treated in a fair and equal manner, on the same footing and with the same emphasis, and recalling that the promotion and protection of one category of rights should never exempt States from the promotion and protection of the other rights, recognizing the special relationship and interaction between peasants and other people working in rural areas, and the land, water, nature and territory to which they are attached and on which they depend for their livelihood”. Draft declaration on the rights of peasants and other people working in rural areas presented by the Chair-Rapporteur of the working group - A/HRC/WG.15/4/2 -15–19 May 2017