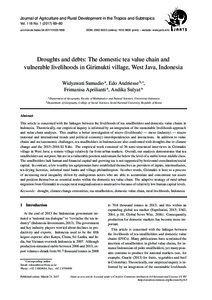 This article is concerned with the linkages between the livelihoods of tea smallholders and domestic value chains in Indonesia. Theoretically, our empirical inquiry is informed by an integration of the sustainable livelihoods approach and value chain analyses. This enables a better investigation of micro (livelihoods) — meso (industry) — macro (national and international trends and political economy) interdependencies and interactions. In addition to value chains and socioeconomic challenges, tea smallholders in Indonesia are also confronted with droughts due to climate change and the 2015–2016 El Niño. The empirical work consisted of 36 semi-structured interviews in Girimukti village in West Java; a remote village relatively far from urban markets. Overall, our analysis demonstrates that tea smallholders are not poor, but are in a vulnerable position and remain far below the level of a stable lower-middle class. The smallholders lack human and financial capital and growing tea is not supported by horizontal coordination/social capital. In contrast, a few wealthy tea agripreneurs have established themselves as providers of inputs, intermediaries, tea drying factories, informal rural banks and village philanthropists. In other words, Girimukti is host to a process of increasing rural inequality driven by endogenous actors who are able to accumulate and concentrate tea assets and position themselves as essential nodes within the domestic tea value chain. The adaptive strategy of rural-urban migration from Girimukti to escape rural marginalisation is unattractive because of relatively low human capital levels.