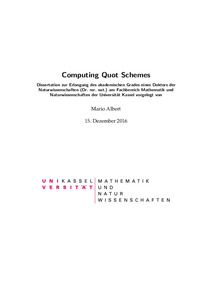 The main goal of this thesis is to develop computational methods which
allow effective computations on Hilbert and Quot schemes.

At first we introduce marked bases over modules. They may be considered as a
form of Gröbner basis which do not depend on a term order. Instead, one
chooses for each generator some term as head module term such that the head
module terms generate a prescribed monomial module. We show that the
involutive normal form algorithm with respect to Pommaret division will
terminate if the prescribed monomial module is quasi-stable. For the
introduction of marked bases over modules we introduce the concept of
resolving decompositions which provide a unifying framework for computing free
resolutions

Then we investigate into the Hilbert function and the Hilbert polynomial.
Furthermore, we analyse the important persistence and regularity theorem for
ideals of Gotzmann. We provide for both theorems new alternative proofs which
are much simpler to understand than previous proofs. They are based on the
theory of Pommaret bases.

We recall the definition of the Hilbert, Quot and Grassmann functors. Then we
construct the "quasi-stable covering" of the Grassmann functor and show that
we can restrict this covering to the Quot functor. The covering is represented
by subfunctors. In an additional step we show that every subfunctor can be
represented by a marked scheme. A marked scheme parametrizes all marked bases
which belong to a prescribed quasi-stable module.

Furthermore, we develop algorithms for the concrete computation of Quot schemes. At
first we investigate the computation of saturated quasi-stable or p-Borel
fixed monomial modules. At second we present two algorithms for computing
marked schemes. By using these algorithms we show that the Hilbert scheme of 4
points in the projective 3-space is reduced. Moreover, we compute for the
first time a concrete representation for a non-trivial Quot scheme and give an
example for Hilbert schemes over fields of finite characteristic.