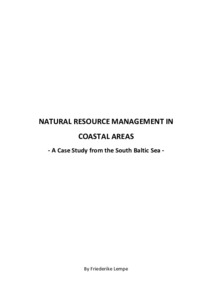 (A Case Study from the South Baltic Sea)

The management of natural resources has been - and will continue to be - one of the most essential tasks for human societies as they depend on the long-term maintenance of natural resources to ensure survival and well-being. Therefore, in this study, the management of natural resources is in the focus of the scientific discussion. The Greifswald Bay (in German: Greifswalder Bodden, GWB) and its coastal areas have been chosen as the case study for this research. The area covers highly vulnerable marine and terrestrial ecosystems and habitats for endemic plants and animals. The area of the Greifswald Bay is distinctively shaped in its culture by a long tradition of anthropogenic uses. The juxtaposition of protection needs to ensure the ecological preservation of the area and, on the other hand, the diversity of divergent spatial human usage claims evinces the need for the implementation of a coherent natural resource management.
In the case study area, the efforts to sustain natural resources in a long-term perspective are documented in a plethora of environmental policies. However, several major environmental problems have not been effectively tackled as of yet, menacing marine and terrestrial ecosystems and habitats in the case study area. There are still huge amounts of nutrients discharged into the water body of the Greifswald Bay, adversely affecting biodiversity and the distribution of macrophytes, which serve as major spawning substrate for herring that is of high economic importance for the regional coastal small scale fishery. This thesis seeks for reasons why environmental problems could still not effectively be addressed.
This study proves that management decisions are made in separate sectoral policy subsystems that follow their own separate laws and interests, but in most cases neglect a holistic management perspective. A situation of competing usage claims has led to conflicts between different actor groups. That was found to considerably impede cooperative approaches to the natural resource management in the case study area. Only a reasonable cross-sectoral coordination of policies can facilitate a coherent management practice, enhancing environmental sustainability and at the same time social and economic conditions. Several examples provided evidence that different policies adversely constrained each other. Thus, management conflicts are institutionalized by a management that is inconsistent in itself and a product of sectoral interest representation. Also the network analysis in this study revealed that there is a considerable lack of communication and cooperation between those actor groups that pursue divergent interests. Several actor groups feel marginalized and ignored in policy making and explain that their existential fears and needs are not adequately acknowledged. Actor relationships are overshadowed by mutual preconceptions and a certain fatigue regarding a further cooperation.
At the same time, the effectiveness of environmental regulations can be questioned. Even if environmental regulations are mostly abided, high nutrient discharges from agricultural land are still found to be the major reason for an unsatisfying quality status of surface water bodies.