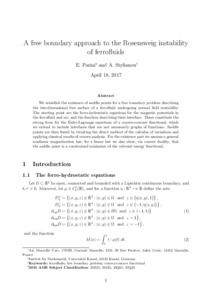 A free boundary approach to the Rosensweig instability of ferrofluids

We establish the existence of saddle points for a free boundary problem describing the two-dimensional free surface of a ferrofluid which undergoes normal field instability (also known as Rosensweig instability). The starting point consists in the ferro-hydrostatic equations for the magnetic potentials in the ferrofluid and air, and the function describing their interface. The former constitute the strong form for the Euler-Lagrange equations of a convex-concave functional. We extend this functional in order to include interfaces that are not necessarily graphs of functions. Saddle points are then found by iterating the direct method of the calculus of variations and by applying classical results of convex analysis. For the existence part we assume a general (arbitrary) non linear magnetization law. We also treat the case of a linear law: we show, via convex duality arguments, that the saddle point is a constrained minimizer of the relevant energy functional of the physical problem.