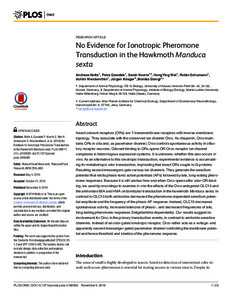 No Evidence for Ionotropic Pheromone Transduction in the Hawkmoth Manduca sexta

Insect odorant receptors (ORs) are 7-transmembrane receptors with inverse membrane topology. They associate with the conserved ion channel Orco. As chaperon, Orco maintains ORs in cilia and, as pacemaker channel, Orco controls spontaneous activity in olfactory receptor neurons. Odorant binding to ORs opens OR-Orco receptor ion channel complexes in heterologous expression systems. It is unknown, whether this also occurs in vivo. As an alternative to this ionotropic transduction, experimental evidence is accumulating for metabotropic odor transduction, implicating that insect ORs couple to G-proteins. Resulting second messengers gate various ion channels. They generate the sensillum potential that elicits phasic-tonic action potentials (APs) followed by late, long-lasting pheromone responses. Because it is still unclear how and when Orco opens after odor-OR-binding, we used tip recordings to examine in vivo the effects of the Orco antagonist OLC15 and the amilorides MIA and HMA on bombykal transduction in the hawkmoth Manduca sexta. In contrast to OLC15 both amilorides decreased the pheromone-dependent sensillum potential amplitude and the frequency of the phasic AP response. Instead, OLC15 decreased spontaneous activity, increased latencies of phasic-, and decreased frequencies of late, long-lasting pheromone responses Zeitgebertime-dependently. Our results suggest no involvement for Orco in the primary transduction events, in contrast to amiloride-sensitive channels. Instead of an odor-gated ionotropic receptor, Orco rather acts as a voltage- and apparently second messenger-gated pacemaker channel controlling the membrane potential and hence threshold and kinetics of the pheromone response.