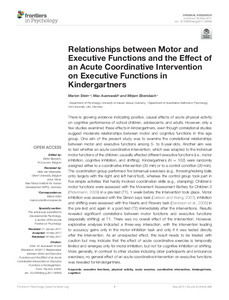 There is growing evidence indicating positive, causal effects of acute physical activity on cognitive performance of school children, adolescents, and adults. However, only a few studies examined these effects in kindergartners, even though correlational studies suggest moderate relationships between motor and cognitive functions in this age group. One aim of the present study was to examine the correlational relationships between motor and executive functions among 5- to 6-year-olds. Another aim was to test whether an acute coordinative intervention, which was adapted to the individual motor functions of the children, causally affected different executive functions (i.e., motor inhibition, cognitive inhibition, and shifting). Kindergartners (N = 102) were randomly assigned either to a coordinative intervention (20 min) or to a control condition (20 min). The coordination group performed five bimanual exercises (e.g., throwing/kicking balls onto targets with the right and left hand/foot), whereas the control group took part in five simple activities that hardly involved coordination skills (e.g., stamping). Children’s motor functions were assessed with the Movement Assessment Battery for Children 2 (Petermann, 2009) in a pre-test (T1), 1 week before the intervention took place. Motor inhibition was assessed with the Simon says task (Carlson and Wang, 2007), inhibition and shifting were assessed with the Hearts and Flowers task (Davidson et al., 2006) in the pre-test and again in a post-test (T2) immediately after the interventions. Results revealed significant correlations between motor functions and executive functions (especially shifting) at T1. There was no overall effect of the intervention. However, explorative analyses indicated a three-way interaction, with the intervention leading to accuracy gains only in the motor inhibition task and only if it was tested directly after the intervention. As an unexpected effect, this result needs to be treated with caution but may indicate that the effect of acute coordinative exercise is temporally limited and emerges only for motor inhibition, but not for cognitive inhibition or shifting. More generally, in contrast to other studies including older participants and endurance exercises, no general effect of an acute coordinative intervention on executive functions was revealed for kindergartners.