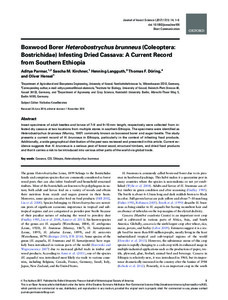 Insect specimens of adult beetles and larvae of 7–9 and 9–10 mm length, respectively were collected from infested dry cassava at two locations from multiple stores in southern Ethiopia. The specimens were identified as Heterobostrychus brunneus (Murray, 1867) commonly known as boxwood borer and auger beetle. The study presents a current record of H. brunneus in Ethiopia, particularly in the context of infesting food products. Additionally, a wide geographical distribution of the pest was reviewed and presented in this article. Current evidence suggests that H. brunneus is a serious pest of forest wood, structural timbers, and dried food products and that it carries a risk to be introduced into various other parts of the world via global trade.