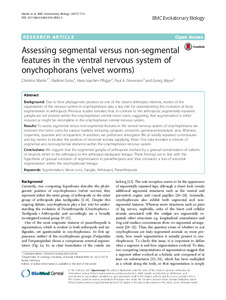 Due to their phylogenetic position as one of the closest arthropod relatives, studies of the organisation of the nervous system in onychophorans play a key role for understanding the evolution of body segmentation in arthropods. Previous studies revealed that, in contrast to the arthropods, segmentally repeated ganglia are not present within the onychophoran ventral nerve cords, suggesting that segmentation is either reduced or might be incomplete in the onychophoran ventral nervous system.
Results:

To assess segmental versus non-segmental features in the ventral nervous system of onychophorans, we screened the nerve cords for various markers, including synapsin, serotonin, gamma-aminobutyric acid, RFamide, dopamine, tyramine and octopamine. In addition, we performed retrograde fills of serially repeated commissures and leg nerves to localise the position of neuronal somata supplying those. Our data revealed a mixture of segmental and non-segmental elements within the onychophoran nervous system.
Conclusions:

We suggest that the segmental ganglia of arthropods evolved by a gradual condensation of subsets of neurons either in the arthropod or the arthropod-tardigrade lineage. These findings are in line with the hypothesis of gradual evolution of segmentation in panarthropods and thus contradict a loss of ancestral segmentation within the onychophoran lineage.