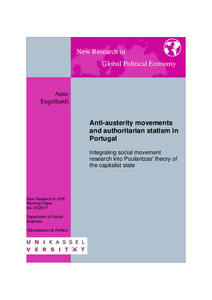 (Integrating social movement research into Poulantzas´theory of the capitalist state)

In the last decade, Portugal saw different forms of open class struggle. Since 2003, the ruling class has been attacking the tremendous achievements of the 500 days of the Portuguese Revolution of 1974-1975 (Raposo 2015: 6). Today, privatisation, wage cuts, de-industrialisation and other forms of neoliberal ‘reforms’ are being implemented. The working class, the poor and the youth did not silently stand by and watch the dismantling of the welfare state that they and their parents had gained by significant effort (Stoleroff 2015: 1). Instead, they resisted in bitter strikes, mass demonstrations and creative flash mobs against attacks on their wages, living standard and future.
The aim of this paper is twofold: First, to explore and characterise how the Portuguese state changed during the last decade under a neoliberal offensive and, how the fractions of financial capitalism, supported by the Troika and the Memorandum of Understanding, particularly drove Portugal towards authoritarian statism. In this context, the state theory of the Greek Marxist Nicos Poulantzas and current progressions of his concept are employed to develop an analytical framework for that matter. Second, the paper analyses how the working class, the poor and precarious groups of the Portuguese society put up resistance, what problems occurred and the impact of the anti-austerity protest between 2010 and 2015. To frame this broad issue, the paper uses a framework of four parameters, which deal with the effects of the anti-austerity movements on an environmental, cognitive, relational and institutional level. Hereby, this concept aims to examine social movements embedded in the capitalist society and state. These four parameters will be partially borrowed from current concepts of social movement researchers, especially from Amanda Tattersall, Sidney Tarrow and Douglas McAdam; and partially developed from the ideas of the Marxists scholars E. P. Thompson and Colin Barker.
The paper tries to put the state, a capitalist theory on the on hand and disruption and class struggle on the other hand alike in focus, to create a more complex understanding of the current political conjuncture.