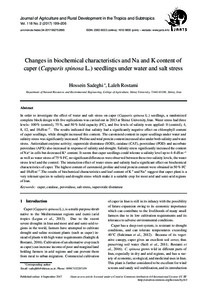 Changes in biochemical characteristics and Na and K content of caper (Capparis spinosa L.) seedlings under water and salt stress

In order to investigate the effect of water and salt stress on caper (Capparis spinosa L.) seedlings, a randomized complete block design with five replications was carried out in 2013 at Shiraz University, Iran. Water stress had three levels: 100 % (control), 75 %, and 5 % field capacity (FC), and five levels of salinity were applied: 0 (control), 4, 8, 12, and 18 dSm^(−1). The results indicated that salinity had a significantly negative effect on chlorophyll content of caper seedlings, while drought increased this content. The carotenoid content in caper seedlings under water and salinity stress was significantly increased. Proline and total protein content increased also under both salinity and water stress. Antioxidant enzyme activity; superoxide dismutase (SOD), catalase (CAT), peroxidase (POD) and ascorbate peroxidase (APX) also increased in response of salinity and drought. Salinity stress significantly increased the content of Na^+ in cells but decreased K^+ content. It seems that caper seedlings could tolerate a salinity level up to 4–8 dSm^(−1) as well as water stress of 75 % FC, no significant differences were observed between these two salinity levels, the water stress level and the control. The interaction effect of water stress and salinity had a significant effect on biochemical characteristics of caper. The highest content of carotenoid, proline and total protein content were obtained in 50 % FC and 18 dSm^(−1).The results of biochemical characteristics and leaf content of K+ and Na+ suggest that caper plant is a very tolerant species to salinity and drought stress which make it a suitable crop for most arid and semi-arid regions of Iran.