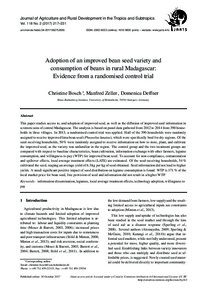 Adoption of an improved bean seed variety and consumption of beans in rural Madagascar: Evidence from a randomised control trial

This paper studies access to, and adoption of improved seed, as well as the diffusion of improved seed information in a remote area of central Madagascar. The analysis is based on panel data gathered from 2012 to 2014 from 390 households in three villages. In 2013, a randomised control trial was applied. Half of the 390 households were randomly assigned to receive improved lima bean seed (Phaseolus lunatus), which were specifically bred for dry regions. Of the seed-receiving households, 50 % were randomly assigned to receive information on how to store, plant, and cultivate the improved seed, as the variety was unfamiliar in the region. The control group and the two treatment groups are compared with respect to baseline characteristics, bean cultivation, information exchange with other farmers, legume consumption, and willingness to pay (WTP) for improved bean seed. To account for non-compliance, contamination and spillover effects, local average treatment effects (LATE) are estimated. Of the seed-receiving households, 54 % cultivated the seed, reaping an average yield of 6.3 kg per kg of seed obtained. Seed information did not lead to higher yields. A small significant positive impact of seed distribution on legume consumption is found. WTP is 171 % of the local market price for bean seed, free provision of seed and information did not result in a higher WTP.