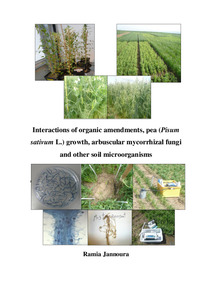 Microbial decomposition of organic substances in soil is a central process for maintaining nutrient cycling, and it can be affected by the presence of plants, especially by mycorrhizal plants, in different ways. Organic fertilizers maintain soil fertility and increase crop productivity. Less attention has been paid to C-rich organic fertilizers. On the other hand, legumes are the main source of N input in organic farming. However, field peas grown as a sole crop suffer many problems that make the yield low and uncertain. Virtually nothing is known about the interactions of saprotrophic soil microorganisms, biotrophic AMF, and plant growth. This thesis represents interdisciplinary research at the interface between soil biology, decomposition processes, and crop science, and is based on pot and field experiments. In the greenhouse experiments, the comparison of the non-mycorrhizal mutant P2 (myc-) and the symbiotic parental isoline Frisson (myc+) in the presence (maize+) or absence (maize-) of 15N-labeled maize residues made it possible to investigate the additional effects of AMF and growing pea plants on the decomposition and microbial use efficiency of 15N-labeled maize residues. The 15N values in the maize+ treatment tended to be significantly lower in the myc+ plants, indicating a lower uptake of maize-derived N caused by the lower decomposition rate of maize residues in this treatment, but also maybe the contribution of the unlabeled N from fixation of atmospheric N2. According to the maize residues recovered as POM, the decomposition rate was reduced by the presence of myc- peas, but especially by myc+, leading to a decreased turnover of the microbial biomass and an improved microbial substrate use efficiency. The formation of microbial residue C was increased and that of microbial residue N was reduced in the presence of plants. This means that the insufficient N supply to soil microorganisms reduced the decomposition of maize residues in the presence of peas, especially myc+ peas. AMF are apparently not involved in the decomposition of newly added organic residues, but intensify the competition between plants and soil microorganisms for available N. The two field experiments were conducted under organic farming conditions using C-rich organic fertilizers. The effects of different quality and quantity of C were considered. The organic fertilizers used were horse manure and yard-waste compost. Peas and oats were grown as sole crops and intercrops. In both field experiments the following results were observed: (1) The positive effect of organic fertilizer, especially horse manure on the microbial biomass indices and microbial activity. (2) Intercropping is an important tool for controlling weeds on pea plots. (3) Intercropping did not affect microbial root colonization, soil microbial biomass indices or CO2 evolution from the soil surface. (4) Positive residual effects of organic fertilizers on the yield of succeeding winter wheat. (5) The horse manure clearly decreased the yield of oats in sole and intercropping oats. (6) Horse manure was more readily available to soil microorganisms than compost. In contrast to the first field experiment where organic fertilizers were applied one day before sowing and less well mixed into the soil, pea plants in the second experiment responded positively to applied organic fertilizers indicating favorable growth conditions. Intercropping decreased nodule dry weight, N2 fixation and photosynthetic rate of peas due to shading of peas by the oat canopy. The striking feature of the field data was the relationship found between the microbial biomass indices in the soil and nutrient concentrations in plants, indicating the important role of soil microorganisms in plant nutrition. In the last experiment, a hexacopter with a digital camera was flown over a field in which peas and oats were grown for evaluating the crop biomass. The observed correlation between the vegetation index (NGRDI) and aboveground biomass indicates that true color images allow to determine crop biomass and to establish yield variation maps of an entire field; the current results are encouraging for the development of unmanned aerial vehicles as a tool for site-specific precision agriculture in a small field area.