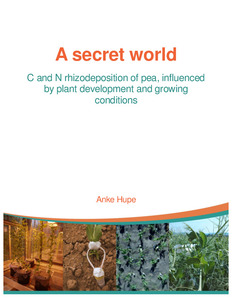 A secret world - C and N rhizodeposition of pea, influenced by plant development and growing conditions

An accurate knowledge of the carbon (C) and nitrogen (N) input through crops into soil is highly important. The estimation of the additional amount of nitrogen originating from rhizodeposition helps to improve crop rotations. The preceding crop effect of cultures can be more accurately evaluated and ultimately the use of nitrogen fertilizer can be reduced and costs can be saved. Moreover, a better knowledge of the amount of carbon emitted by plants and incorporated in the soil improves the estimation of the C sequestration potential of soils.
A first study was carried out to estimate the C and N rhizodeposition over the course of time. The development of rhizodeposition depends on the development of plant root. Therefore, it can be assumed that the amount of rhizodeposition changes during plant development. In detail, it was to be examined whether the amount of rhizodeposition correlates with the root to shoot ratio of pea plants. Moreover, a possible positive influence of mycorrhiza on C and N rhizodeposition was examined. Pisum sativum L. cv. Frisson and the non-mycorrhizal (myc-) and non-nodulating (nod-) pea mutant of Frisson, P2, were cultivated under controlled conditions. The plants were labelled five times in ten weeks with 13C and 15N, using the cotton wick method, beginning 14 days after sowing. Plants were harvested at four different growth stages, depending on plant development (begin of flowering, end of flowering, green ripe and maturity). At each sampling date, the enrichment of plant parts and soil, microbial biomass, K2SO4 extractable C and the inorganic N pool of soil were determined. With this, the incorporation of rhizodeposition into the different soil pools, could be estimated. The amount of C and N rhizodeposition was calculated using the mass balance approach, developed in the first part of the thesis. This approach is less sensitive against tracer or nutrient relocation processes within the plant. Therefore, the mass balance approach is a good alternative for the traditional way of calculating rhizodeposition. No significant differences could be detected for the incorporation of C and N derived from rhizodeposition (CdfR and NdfR) into the microbial biomass or into the extractable soil pool over time, even though a steady increase was observed. Nevertheless, microbial incorporation of rhizodeposits was on a low level throughout, indicating that rhizodeposits are not an easily available source of C and N. At the time of highest mycorrhization, Frisson released significantly more NdfR than P2, indicating a stronger N transfer into the mycorrhizosphere. Our results indicate that CdfR and NdfR release from roots follow different patterns: an even flow of C, driven by exudation at an earlier growth stage and root senescence during maturation and a steady flow of N.
To estimate a realistic amount of C and N rhizodeposition, an experiment was carried out with peas grown under field conditions and without influencing the root system or the water and nutrient budget. The spring pea (Pisum sativum L. cv. Santana) was manually sown in microplots and grew without restricted root growth. Similarly to the pot experiment, plants were labelled with 13C and 15N using the cotton wick method, beginning with 3 leaves unfolded. In order to prevent an over- or underestimation of root biomass, soil sampling took place at 3 defined sectors in the microplot. The amount of C and N rhizodeposition was estimated according to the mass balance approach. The careful labelling of plants resulted in homogeneous and high plant enrichment with 13C and 15N. Therefore, despite the greater effort required, the cotton wick method is recommended for the labelling under field condition. It was shown that the quantity of C and N rhizodeposition did not change between flowering and dry ripeness of peas. Around one third of C and N rhizodeposition was integrated into microbial biomass and K2SO4 extractable C or the inorganic N pool of soil, indicating that rhizodeposits consist of substantial particular amounts, such as root residues or root fragments, which take longer to be mineralized. When comparing this field study with the former pot experiment (with the same harvest dates, the same labelling method and the same soil), a shift of the root-to-shoot ratio and the rhizodeposition-to-root ratio has to be mentioned. This was caused by a higher root development until flowering and a higher root turnover after flowering, under field conditions. Because of differences in plant development, caused by restricted root growth in pot experiments, the calculated amount of rhizodeposition from pot experiments cannot be transferred easily into the field.