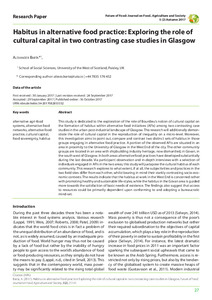 This study is dedicated to the exploration of the role of Bourdieu’s notion of cultural capital on the formation of habitus within alternative food initiatives (AFIs) among two contrasting case studies in the urban post-industrial landscape of Glasgow. This research will additionally demonstrate the role of cultural capital in the reproduction of inequality on a micro-level. Moreover, this investigation aims to point out, compare and contrast two distinct sets of habitus in those groups engaging in alternative food practice. A portion of the observed AFIs are situated in an area in proximity to the University of Glasgow in the West End of the city. The other community groups are located in an area with shipbuilding industry heritage, now dismantled, in Govan, in the south west of Glasgow. In both areas alternative food practices have developed substantially during the last decade. Via participant observation and in-depth interviews with a selection of individuals engaged in AFIs in the two areas, this study will juxtapose the cultural habitus of each community. This research explores to what extent, if at all, the subjectivities and practices in the two field sites differ from each other, whilst bearing in mind their starkly contrasting socio-economic contexts. The results indicate that the habitus at work in the West End is concerned rather with promoting healthy and sustainable life-styles, while the habitus in the Govan area is guided more towards the satisfaction of basic needs of existence. The findings also suggest that access to resources could be primarily dependent upon conforming to and adopting a bureaucratic mind-set.