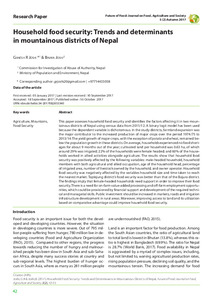 This paper assesses household food security and identifies the factors affecting it in two mountainous districts of Nepal using census data from 2011/12. A binary logit model has been used because the dependent variable is dichotomous. In the study districts, farmland expansion was the major contributor to the increased production of major crops over the period 1974/75 to 2013/14. The yield growth of major crops, with the exception of potato and wheat, remained below the population growth in these districts. On average, households experienced no food shortages for about 9 months out of the year; cultivated land per household was 0.63 ha, of which around 29% was irrigated; 22% of the households were female headed; and 60% of the households worked in allied activities alongside agriculture. The results show that household food security was positively affected by the following variables: male-headed household, household members with both agricultural and allied occupation, age of the household head, percentage of irrigated area, number of livestock owned by the household, and owner operator. Household food security was negatively affected by the variables household size and time taken to reach the nearest market. Taplejung district’s food security was better than that of the Bajura district. The findings imply that female-headed households need support in order to improve their food security. There is a need for on-farm value-added processing and off-farm employment opportunities, which could be provisioned by financial support and development of the required technical and managerial skills. Public investment should be increased in markets, roads and irrigation infrastructure development in rural areas. Moreover, improving access to land and its utilization based on comparative advantage could improve household food security.