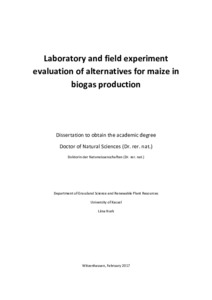 The objective of this thesis was to investigate possible alternatives to monocropped maize for the production of biogas.
The strategy of double-cropping for the production of biogas substrates is addressed by degradation experiments with maize as the standard crop and the two alternative crops sunflower and sorghum-sudangrass. Biological degradation experiments were made in biogas batch reactors for all three crops in each maturity stage. The remaining material was analysed for different chemical parameters to determine the degree of degradation of and their influence on biogas production.
As the second objective of this thesis the investigation of an alternative farming practice to monoculture of maize was tried out. Mixed crop experiments with maize and climbing beans were conducted at three research sites in over the course of 3 years. One site was managed under organic conditions and two under conventional conditions. In all research sites treatments with different seeding density and seeding time of beans were tested. Additionally different weed regulation methods were tested. In all research sites also the influence of weed coverage on total yield was measured.
Moreover the biogas potential of a mixture of climbing bean and maize was measured based on artificially mixed crop-silages. The silages were made with varying proportions of maize and bean. The chemical parameters from all silages were analysed and verified for influences on biogas production potential.