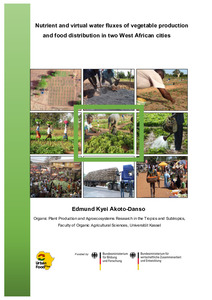 Water and food security will be challenged by uncertainties related to changing climatic and socio-economic conditions triggered by urbanization. The present studies aimed at (a) investigating the effects of mineral fertilization and biochar amendment at two water quality and quantity levels on biomass production, plant nutrition, and soil moisture in vegetables with a focus on Tamale, (b) assessing nutrient losses via leaching and gaseous emissions and calculated nutrient balance and use efficiencies in Tamale and Ouagadougou, and (c) determining the magnitude and sources of virtual water flows (inflow and outflows) in agricultural commodity trade within and across rural and urban spaces. In the first two studies, a split block design with four treatments (Normal Agricultural Practice (NAP), biochar (20 t ha-1), NAP + biochar, biochar and an unfertilized control) were factorially combined with two water qualities (clean water and wastewater) and two water irrigation quantities (usual (100%) and reduced (67%)), and replicated four times. For the last study, unprocessed food flows from local, regional, national and international sources were systematically recorded at all roads leading to both cities in a two-year quantitative survey.
In the first study, biochar significantly increased fresh matter yields in the first five cropping cycles by 15%, likely caused by increases in plant available phosphorus (Bray-P) and extractable potassium (K) and by stabilizing soil pH. Fertigation with wastewater contributed significantly to plant nutrition with up to 20-fold yield increment on unfertilized plots during the dry seasons. The second study revealed surpluses (input minus output) of N and P for all treatments in both cities. In Tamale, the annual nutrient surpluses were up to 361 kg N ha-1 and 217 kg P ha-1, but K was removed in excess of up to 125 kg ha- 1. Ouagadougou, on the other hand had surpluses of up to 692 kg N ha-1, 166 kg P ha-1 and 427 kg K ha-1 yr-1.
The third study revealed variations in seasonal virtual water flows with higher flows in the peak season. Cereals contribute 50% to 70% to the total virtual water inflows in both cities. Southern Ghana is the major net virtual water importer from Tamale based on its northern source of cereals, legumes, vegetables, and livestock. For Ouagadougou, large flows of virtual water were imported in the form of cereals (specifically rice, Oyza sativa L.) from international sources through Ivory Coast. In general, a variety of national sources for different food groups, including both water-secure (western and eastern Burkina Faso) and water-constraint regions (northern Burkina Faso), allow the city of Ouagadougou to be more resilient to water-related and food supply shocks.