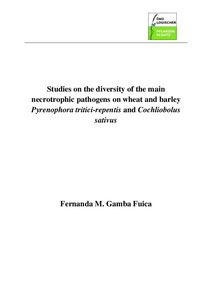 Leaf blights such as tan spot of wheat (Pyrenophora tritici-repentis) and spot blotch of barley (Cochliobolus sativus) are among the main constraints in achieving high and stable yields and are the main concerns among the several intrinsic drawbacks of narrow cropping sequencesas both are residue borne. The development of useful and durable resistance against prevalent races requires detailed information on the virulence diversity of the pathogen and the type of resistances available in the host. Thus, the focus of this thesis was the study of diversity in virulence of P. tritici-repentis and C. sativus, andfor the latter it was also analyzed the possibility to establish an international differential set like the one already existing for tan spot. In a three-year study of the race structure of tan spot in South America (Chapter 2) only races 1 and 2 were found. This low level of pathogenic diversity found was somewhat expected, since the bread wheat grown in this region has a narrow genetic diversity with respect to tan spot resistance. In contrast, in Morocco (Chapter 3), we found races 1, 5, 6 and 7 among 135 isolates. Races 5 (ToxB producer) and 6 (ToxB+ToxC producer) represented90%of the isolates tested. The identification of races 1 and 7 that both produce the otherwise not present ToxA needs to be carefully considered since P. tritici-repentis has the ability to generate new combinations of virulence increasing its race diversity.Aggressiveness to 28 barley genotypes was high among 44 Uruguayan Cochliobolus sativus isolates collected between 1993-2008 and aggressiveness profiles were very diverse (Chapter 4). In a more extensive study (Chapter 5) 322 isolates collected between 2001 and 2010 were characterized for their quantitative interactions with 35 barley lines. Data were analyzed with Hierarchical Clustering on Principal Components (HCPC) resulting in nine clusters of lines and six isolate clusters. Reducing the number of isolates to 147 based on redundant infection responses resulted in eight line clusters and seven isolate clusters. Despite some clear isolate specific interactions the overall host-pathogen interactions were quantitative and there is no indication that a common differential set to monitor worldwide virulence changes can be identified. Even without true differentials it will be useful to identify a set of genetically broad barleys for international use by testing with C. sativus isolates of several geographic origins across environments. Further research should aim at characterizing the genetic diversity and population structure of C. sativus and to provide an insight into the phylogenetic relationships among the aggressiveness groups identified of this economically important barley and wheat pathogen using molecular markers. For resistance testing in Uruguay, a range of the most aggressive and representative isolates should be used to provide the most effective screening of lines in barley breeding programs.In conclusion, breeding for resistance to tan spot in wheat and spot blotch in barley need to follow different pathways. Effective and sustainable disease management will come from a holistic approach where crop resistance goes hand in hand with diversification based on rotation involving non-cereal host crops as well as potentially cultivar mixtures.