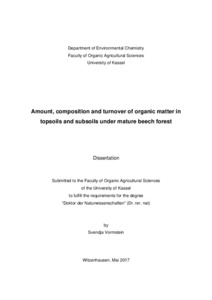 Amount, composition and turnover of organic matter in topsoils and subsoils under mature beech forest

Two-third of the terrestrial carbon (C) is stored in soils, and up to 63 % of the soil organic C (SOC) is stored in subsoils (i.e. below 30 cm soil depth). Forest soils account for nearly 70 % of the global SOC, demonstrating their great importance regarding the global carbon cycle. The higher average age of the OC stored in subsoil indicates that the subsoil OC is more stable against microbial decomposition. The capability of soil to stabilize OC is affected by substrate characteristics (e.g. size, distribution, chemical composition) of the organic material (OM) as well as soil mineral characteristics (e.g. content of clay, iron and aluminum oxides, polyvalent cations). Both factors and thus the mechanisms of C mineralization and stabilization are assumed to differ widely between topsoil and subsoil. In contrast to forest topsoil, there is less information about the mineralization and stabilization of OC in forest subsoils. Soil enzymes are of particular importance for the decomposition of OM, but laboratory-based determination of their activities is elaborate and time-consuming. Application of visible and near infrared spectroscopy (vis-NIRS) may thus be beneficial for an estimation of their activities, but the usefulness of vis-NIRS remains controversial. The first study was a long-term incubation experiment to analyze the effects of concentration, spatial distribution and size of fine beech roots on their rates of decomposition in forest topsoil and subsoil. After the incubation experiment, subsamples were taken and several soil properties were determined. The rate of root application affected the mineralization at both soil depths, whereas the distribution had an effect in all topsoil treatments but only in the subsoil with the larger roots. Correlation analyses suggest an effect of the calcium and potassium supply on the microbial biomass and turnover of roots if the roots are locally concentrated. The data of this study indicate that in addition to root characteristics, the availability of macronutrients also has to be considered to elucidate their decomposition kinetics throughout the soil profile. In the second study, the influence of soil mineral characteristics on different OM stabilization mechanisms in relation to soil depth was analyzed. Horizontal samples of five pedogenetically different soils under mature beech were separated into four aggregate size and three density fractions which were quantified and characterized by FTIR spectroscopy. Additionally, the content of microbial biomass C and the cumulative basal respiration over the course of 14 days were determined. The relative proportion of stabilized OC increased with soil depth, independent of the soil type. Additionally, the percentage of bulk SOC that had been respired as CO2 within 14 days tended to increase with increasing soil depth, indicating a stronger separation of the bulk soil OM into a labile and a stable pool in the subsoil compared with the topsoil. The FTIR analyses suggest an enrichment in C=O groups of the OM with increasing soil depth, which might result from a higher degree of microbial processing. This study underlined the importance of forest subsoil for long-term C stabilization and simultaneously highlights the importance of subsoil OM for maintaining microbial activity as well as the subsoil nutrient cycle. In the third study, the estimation accuracies and the usefulness of vis-NIRS for the estimation of general soil properties and nine enzyme activities for two pedogenetically different sites were determined. For each site, a calibration sample consisting of two transects and an independent validation sample consisting of one transect were obtained and their absorbance spectra recorded. Standard partial least squares (PLS) regression and PLS regression with a genetic algorithm (GA-PLS) for variable selection, which may improve estimation accuracies, were used to evaluate the estimation accuracies. The study confirmed the usefulness of vis-NIRS for an estimation of SOC and N contents in independent transects, whereas the estimation accuracy of pH and texture was variable and dependent on the range of measured data. However, GA-PLS markedly improved estimation accuracies in cross-validation of the main soil properties compared to PLS, but generally not in the validation transects. Only a few enzyme activities could be estimated in independent validation, but there was no benefit of vis-NIRS for the estimation of their activities compared to estimations using laboratory data.