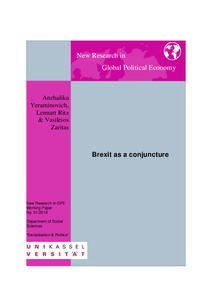 Brexit as a conjuncture

This academic paper presents the results of a small-scale research project with the title “Brexit as a conjuncture”. We combine the theoretical reflection on the conjunctural tendencies in the United Kingdom (UK) since the Thatcher era with the empirical media analysis at the moment of the rupture. Unlike academic papers that discuss either political and economic reasons of Brexit (see Clarke, Goodwin and Whiteley, 2016; Arnorsson and Zoega, 2016) or its conjunctural dynamics (see Jessop, 2016), our work combines the multi-disciplinary insights of both critical political economy and cultural anthropology. In particular, we, on the one side, consider the long-term conjunctural dynamics of labour–capital contradictions in the UK from the theoretical perspectives of Jessop, Hall, Gallas, Poulantzas, Gramsci, and Laclau/Mouffe. Consequently, our goal is to understand the current rupture of Brexit as a path-dependent outcome of a long-standing crisis of neoliberalism.
On the other side, we attempt to think “out of the box”, not “take[ing] institutions and social and power relations for granted, but call[ing] them into question by concerning itself with their origins and whether they might be in the process of changing” (Cox, 1981: 129). We seek to uncover the emergent elements of the social reality in which the conjunctural and the organic come together in a single rupture. This practically means the analysis of the discourses, narratives, strategies, and tactics of the media coverage over a period of one month from 23 May –23 June 2016, immediately followed by the day of the Referendum. Four nationally circulated newspapers were selected, based on their readership and political tone. These media sources are the Mirror and The Guardian (centre–left), broadcasting in favour of the Remain camp, and the Daily Mail and the Daily Telegraph (centre–right), supporting Brexit.
Methodologically, we craft our analysis technique based on framing theory and ethnographic content analysis. News items are viewed as political tools of influencing public perceptions and choices. How their content is framed, consequently, defines the success of political mobilization. Our analysis unfolds throughout the paper within four chapters. The first of them theoretically maps the development of Brexit as a conjuncture, tracing it back to the establishment of Thatcherism. The second chapter explains our methodology. The third one contains the empirical analysis of the coverage of the Referendum in Mirror and The Guardian. Finally, the fourth chapter empirically studies how the Daily Mail and the Daily Telegraph reported on this issue.Our findings show that the Brexit campaign and the referendum have become the rupture of the organic crisis tendencies in the UK. We have built the conjunctural map of Brexit which illustrates the contradictions traced back to the Thatcher era. These contradictions led to the rise of the UKIP as a path dependent outcome. Our discourse analysis shows that the reporting of the newspapers The Guardian and The Mirror remained within the common-sense framework of neoliberalism. Lastly, the reporting of the Daily Mail and the Daily Telegraph presented the UKIP as a common-sense of change in contrast to Cameronism and its contradictions.