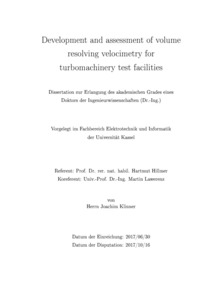 The present thesis assesses the applicability of volume resolving velocimetry
for turbo machinery test facilities. Tomographic particle image velocimetry has been implemented in a transonic cascade wind tunnel. Assessment is based on 3D-3C measurements of the passage vortex in an axial compressor cascade at subsonic inflow (Ma1=0.6). Results show broad consistency with stereoscopic PIV with improved depth resolution. A novel Fast Multiplicative Algebraic Reconstruction Technique (FMART) enables signi cantly faster computations of particle reconstructions in comparison to a state-of-the-art procedure (simultaneous MART) while maintaining similar accuracies.
The second part describes the development of tomographic shadowgraphy for 3-D measurements of spatial fuel spray distributions and droplet velocities. This novel approach is based on simultaneous imaging from different directions with pulsed LED inline illumination. Assessment is based on 3D-3C measurements of the airblast atomization of a single kerosene jet in a swirl flow at air pressures between 4-7 bar and air temperatures between 440-570 K inside a spray test facility. The minimum resolvable droplet diameter is 10 µm under the given experimental conditions. Validation against PDA data revealed consistency at size classes d = 10µm and 15µm.

Part of the work presented is supported by the EU-project AFDAR (Advanced Flow Diagnostics for Aeronautical Research, project no. 265695) of the 7th Framework programme whose support is gratefully acknowledged.