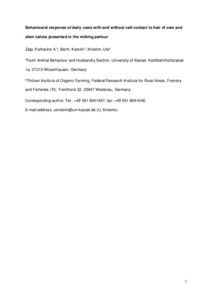 In systems where dairy cows are milked and additionally suckle their calves during the first months of lactation, problems with alveolar milk ejection during machine-milking occur. As olfaction is a key sense for kin recognition and acceptance at the udder, olfactory stimulation might alleviate this challenge. In this pilot study, we investigated whether cows behaviourally respond to calf hair presented in the parlour, and whether this is affected by suckling the own calf or not. Discrimination between hair of the own calf in a thin cloth bag (‘own’), hair of an alien calf (‘alien’) and a control cloth bag without calf hair (‘no’) was tested among 17 multiparous and 6 primiparous cows with free calf-contact (‘contact’) and 13 multiparous and 4 primiparous cows separated within 12 hours after parturition from their calves (‘control’). Both groups were milked twice daily in a tandem milking parlour, where they were individually tested in six consecutive milkings (trials) starting between the 12th and 20th day of lactation. Two of three olfactory stimuli were simultaneously presented. Sniffing or licking of the stimuli during the first minutes of milking (response duration in % of total observation time) and number of trials with any response (frequency of responses) were recorded. Calf hair (‘own’ or ’alien’) elicited responses in 60% of the animals at least once, but altogether there were only overt responses in 23% of trials. Significant differences in responsiveness towards the different stimuli were found in terms of frequency of responses for all cows (n=28 without missing data, p=0.003). Response duration differed significantly for all responsive multiparous cows (n=12, p=0.049) and in tendency for all responsive heifers (n=8, p=0.061) and for responsive ‘contact’ cows and heifers (n=11, p=0.034). In all these cases, responses were highest for ‘own’, intermediate for ‘alien’ and lowest for ‘no’. In the post hoc tests, no significant differences between ‘own’ and ‘alien’ could be detected. Despite low response rates to the presented olfactory stimuli in general, we conclude that the responsive multiparous cows and ‘contact’ heifers were able to perceive the presented calf odour and preferred to sniff/lick those stimuli compared to a stimulus with ‘no’ odour.