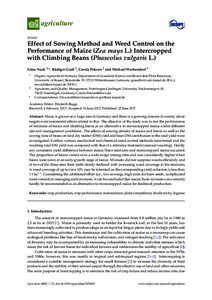 Maize is grown on a large area in Germany and there is a growing concern in society about negative environmental effects related to this. The objective of the study was to test the performance of mixtures of maize and climbing beans as an alternative to monocropped maize under different site and management conditions. The effects of sowing density of maize and beans as well as the sowing time of beans on total dry matter (DM) yield and bean DM contribution to the total yield were investigated. Further, various mechanical and chemical weed control methods were tested and the resulting total DM yield was compared with that of a reference treatment (manual weeding). Hardly any consistent yield difference between maize/bean mixtures and monocropped maize occurred. The proportion of beans varied over a wide range among sites and was consistently higher when beans were sown at an early growth stage of maize. Mixtures did not suppress weeds efficiently and at two of the three sites their yield clearly declined with increasing weed coverage in the mixtures. A weed coverage of up to circa 10% may be tolerated, as the corresponding yield reduction is less than 1 t ha−1. Considering the additional effort (i.e., two sowings, high costs for bean seeds, complicated weed control) in managing such mixtures, it can be concluded that maize/bean mixtures can currently hardly be recommended as an alternative to monocropped maize for feedstock production.