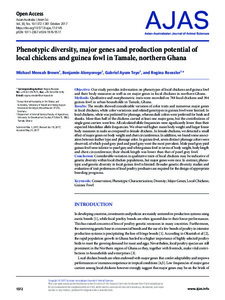 Objective:
Our study provides information on phenotypes of local chickens and guinea fowl and their body measures as well as on major genes in local chickens in northern Ghana.
Methods:
Qualitative and morphometric traits were recorded on 788 local chickens and 394 guinea fowl in urban households in Tamale, Ghana.
Results:
The results showed considerable variation of color traits and numerous major genes in local chickens, while color variations and related genotypes in guinea fowl were limited. In local chickens, white was preferred for plumage, whereas dark colors were preferred for beak and shanks. More than half of the chickens carried at least one major gene, but the contributions of single gene carriers were low. All calculated allele frequencies were significantly lower than their expected Mendelian allele frequencies. We observed higher mean body weight and larger linear body measures in male as compared to female chickens. In female chickens, we detected a small effect of major genes on body weight and chest circumference. In addition, we found some association between feather type and plumage color. In guinea fowl, seven distinct plumage colors were observed, of which pearl grey pied and pearl grey were the most prevalent. Male pearl grey pied guinea fowl were inferior to pearl grey and white guinea fowl in terms of body weight, body length and chest circumference; their shank length was lower than that of pearl grey fowl.
Conclusion:
Considerable variation in qualitative traits of local chickens may be indicative of genetic diversity within local chicken populations, but major genes were rare. In contrast, phenotypic and genetic diversity in local guinea fowl is limited. Broader genetic diversity studies and evaluation of trait preferences of local poultry producers are required for the design of appropriate breeding programs.