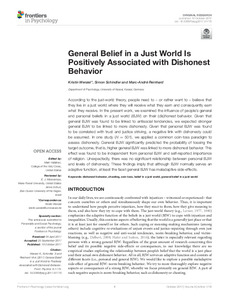 According to the just-world theory, people need to – or rather want to – believe that they live in a just world where they will receive what they earn and consequently earn what they receive. In the present work, we examined the influence of people’s general and personal beliefs in a just world (BJW) on their (dis)honest behavior. Given that general BJW was found to be linked to antisocial tendencies, we expected stronger general BJW to be linked to more dishonesty. Given that personal BJW was found to be correlated with trust and justice striving, a negative link with dishonesty could be assumed. In one study (N = 501), we applied a common coin-toss paradigm to assess dishonesty. General BJW significantly predicted the probability of tossing the target outcome, that is, higher general BJW was linked to more dishonest behavior. This effect was found to be independent from personal BJW and self-reported importance of religion. Unexpectedly, there was no significant relationship between personal BJW and levels of dishonesty. These findings imply that although BJW normally serves an adaptive function, at least the facet general BJW has maladaptive side-effects.