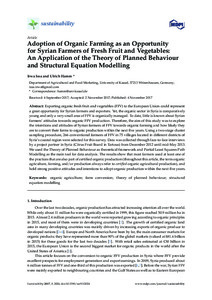 Adoption of Organic Farming as an Opportunity for Syrian Farmers of Fresh Fruit and Vegetables: An Application of the Theory of Planned Behaviour and Structural Equation Modelling

Exporting organic fresh fruit and vegetables (FFV) to the European Union could represent a great opportunity for Syrian farmers and exporters. Yet, the organic sector in Syria is comparatively young and only a very small area of FFV is organically managed. To date, little is known about Syrian farmers’ attitudes towards organic FFV production. Therefore, the aim of this study was to explore the intentions and attitudes of Syrian farmers of FFV towards organic farming and how likely they are to convert their farms to organic production within the next five years. Using a two-stage cluster sampling procedure, 266 conventional farmers of FFV in 75 villages located in different districts of Syria’s coastal region were selected for this survey. Data was collected through face-to-face interviews by a project partner in Syria (Citrus Fruit Board in Tartous) from December 2012 until mid-May 2013. We used the Theory of Planned Behaviour as theoretical framework and Partial Least Squares Path Modelling as the main tool for data analysis. The results show that most farmers used at least one of the practices that are also part of certified organic production (throughout this article, the term organic agriculture, farming, and/or production always refer to certified organic agricultural production), and hold strong positive attitudes and intentions to adopt organic production within the next five years.