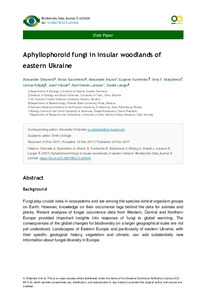 Fungi play crucial roles in ecosystems and are among the species-richest organism groups on Earth. However, knowledge on their occurrence lags behind the data for animals and plants. Recent analyses of fungal occurrence data from Western, Central and Northern Europe provided important insights into response of fungi to global warming. The consequences of the global changes for biodiversity on a larger geographical scale are not yet understood. Landscapes of Eastern Europe and particularly of eastern Ukraine, with their specific geological history, vegetation and climate, can add substantially new information about fungal diversity in Europe.
New information

We describe the dataset and provide a checklist of aphyllophoroid fungi (non-gilled macroscopic Basidiomycota) from eastern Ukraine sampled in 16 areas between 2007 and 2011. The dataset was managed on the PlutoF biodiversity workbench (http://dx.doi.org/10.15156/BIO/587471) and can also be accessed via Global Biodiversity Information Facility (GBIF, parts of datasets https://doi.org/10.15468/kuspj6 and https://doi.org/10.15468/h7qtfd). This dataset includes 3418 occurences, namely 2727 specimens and 691 observations of fructifications belonging to 349 species of fungi. With these data, the digitised CWU herbarium (V. N. Karazin Kharkiv National University, Ukraine) doubled in size A most detailed description of the substrate's properties and habitat for each record is provided. The specimen records are supplemented by 26 nuclear ribosomal DNA ITS sequences and six 28S sequences. Additionally, 287 photographs depicting diagnostic macro- and microscopic features of fungal fruitbodies as well as studied habitats are linked to the dataset. Most of the specimens have at least one mention in literature and relevant references are displayed as associated with specimen data. In total, 16 publication references are linked to the dataset. The dataset sheds new light on the fungal diversity of Eastern Europe. It is expected to complement other public sources of fungal occurrence information on continental and global levels in addressing macroecological and biogeographical questions.