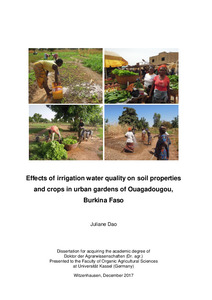 Urban food production is an important supplier of fresh produce in the rapidly growing West African cities. In year-round vegetable production of the semi-arid tropics, low quality water is often use for irrigation. This results in health risks for producers and consumers, and causes environmental pollution, followed by soil contamination and crop yield reduction. In the presented PhD thesis quality and effects of irrigation water in urban vegetable gardens of Ouagadougou, Burkina Faso, were examined. The aim of these studies was to quantify contamination of water, vegetables and soil, in urban locations of Ouagadougou, as well as to identify strategies to reduce contamination risks and its consequences.
The first study focused on pathogenic contamination of lettuce along the trade chain and aimed to identify microbial inputs during post-harvest handling. Water and lettuce samples were analysed for total coliforms, Escherichia coli (E. coli) and Salmonella spp. at different post-harvest stages. Results showed that 60 % of the irrigation water samples were above the international thresholds for E. coli and 30 % of the samples were contaminated with Salmonella spp.. Total coliform and E. coli loads on lettuce increased along the trade chain. Half of the 60 lettuce samples were tested positive for Salmonella spp.. Appropriate post-harvest handling of lettuce, including washing with tap water, prevented the increase of total coliforms.
The second study evaluated effects of sodic alkaline wastewater irrigation, on soil chemical properties. A literature review allowed an overview of reduced soil quality in semi-arid climate regions, induced by industrial wastewater with a sodium (Na) content above
100 mg l-1. Worldwide various industrial wastewaters, such as effluents from beverage industry, tanneries and papermills, were documented to provoke Na hazards in soils. The study allowed to conduct a case study of the industrial area of Ouagadougou, where sodic wastewater was used to irrigate urban gardens. Irrigation with those water sources irreversibly damaged soil structure, reduced soil productivity and thus leads to a loss of farmland. The importance of sampling the surrounding area as well as the subsoil in order to gain knowledge about soil Na status was highlighted. The study not only revealed that irrigation with sodic water induced hazards, but also that seepage of wastewater channels likely affected soil quality negatively.
The experiment of the third study tested if gypsum as a soil amendment could reverse negative impacts of sodic industrial wastewater on soil quality and crop development. For this an on-farm experiment was carried out in the industrial area of Ouagadougou. Depending on the level of soil degradation, either 0, 6.8 or 10 t ha-1 of finely powdered gypsum were incorporated into the topsoil. Rainfed maize (Zea mays L.) as well as spinach (Spinacia oleracea L.) irrigated at two water qualities (clean and wastewater) were cultivated.
Results showed that gypsum and clean water treatment reduced soil pH and sodium adsorption ratio, while aggregate stability was increased. Although Na uptake of plants was reduced and root length density of maize was increased, no yield effects of gypsum were found.
Overall, irrigation water composition in urban areas of Ouagadougou varied widely, depending on whether the sources of pollution were industrial effluents or wastewater of domestic origin containing faeces. Furthermore, natural water amounts in streams, and seasonal changes influenced dilution of the wastewater in the channels. On the one hand, irrigation of urban vegetables provokes pathogenic risks which could be significantly reduced through careful washing of the produce with tap water. Industrial wastewater that induces Na hazards to soils was found to cause serious lasting damage to the agricultural production area. The necessity of wastewater treatment prior to disposal as well as the need to recover degraded soil by melioration was highlighted.

German Federal Ministry of Education and Research (BMBF; FKZ 031A242A) and the German Ministry for Economic Cooperation and Development (BMZ): funding of the UrbanFoodPlus project (www.urbanfoodplus.org)