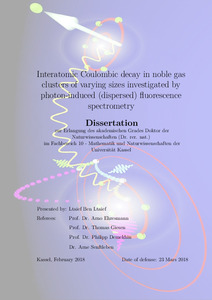 The main topic of this thesis is to study experimentally an ultrafast and efficient non
radiative mechanism – the well-known interatomic Coulombic decay (ICD) – in noble
gas clusters by employing fluorescence spectrometry technique in combination with
synchrotron radiation. Using Neon clusters as prototype systems, a special variety of
ICD, termed resonant ICD (RICD), has been investigated by a selective excitation of
one component of the cluster and for different mean cluster sizes.
The first part of the thesis was devoted to observe new open cluster fluorescing
decay channels following ICD, reveal the associated resonant ICD (RICD) process,
and hence, extensively characterize its radiative final states. Here, simultaneous measurements
of undispersed vacuum ultraviolet (VUV) and UV/visible photons emitted
from 2s inner-valence-excited Neon clusters were made. At first glance, the observed
cluster features in the measured VUV fluorescence yield suggest that the initially
created 2s inner-valence state in Neon cluster relaxes predominantly by a spectator
RICD. At second glance, the direct correspondence of the structures observed in
the measured VUV and UV/visible cluster fluorescence signals implies that the final
states of the spectator RICD release their excess energy by photon emission cascade:
First, by the Rydberg-to-Rydberg transitions in the UV/visible spectral range, and
then, by the Rydberg-to-valence transition in the VUV range. To trace the decay
pathway during this radiative cascade, an additionally dispersed VUV fluorescence
measurement was performed for the most intense RICD fluorescence feature.
The second part of the thesis concerns investigation of VUV fluorescence emission
from Neon clusters of varying sizes after excitation with photons of energies
near and far below the 2s-electron photoionization thresold of Neon atoms. In the
Neon 2s-regime, the cluster size-dependent VUV fluorescence excitation functions of
Neon clusters show a series of distinct cluster fluorescence features; four of which are
attributed to the resonant 2s \to np (n = 3, 4, 5, 6) excitations of cluster-surface
atoms and one to 2s \to 3p excitation of cluster-bulk atoms. Included in these are
the ones emerged from spectator RICD which are found to be visible for all cluster
sizes but appear to be less prominent in the VUV fluorescence excitation functions of
the larger clusters due to additional structureless fluorescence emission that increases
with increasing cluster size. This emission has a threshold energy of 35.8 eV and is
observed increasing almost linearly with energy at lower exciting-photon energy. It is
interpreted as due to inelastic scattering of the initially outgoing 2p photoelectrons
with condensed neutral Neon atoms.
Due to the longer escape length of photons versus electrons emitted from dense
matter, this work in general brings about a possibility of using fluorescence spectrometry
as a potential detection sheme to reveal interatomic/molecular electronic
processes in real dense media towards understanding, for example, the details of radiation
damage in living tissues such as DNA double-strand breaks.