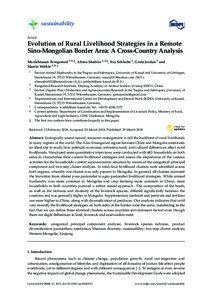 Ecologically sound natural resources management is still the backbone of rural livelihoods in many regions of the world. The Altai-Dzungarian region between China and Mongolia constitutes an ideal site to study how political, economic, infrastructural, and cultural differences affect rural livelihoods. Structured semi-quantitative interviews were conducted with 483 households on both sides to characterise their current livelihood strategies and assess the importance of the various activities for the households’ current socio-economic situation by means of the categorical principal component and two-step cluster analysis. In total, four livelihood clusters were identified across both regions, whereby one cluster was only present in Mongolia. In general, all clusters mirrored the transition from almost pure pastoralist to agro-pastoralist livelihood strategies. While animal husbandry was more common in Mongolia and crop farming more common in China, most households in both countries pursued a rather mixed approach. The composition of the herds, as well as the richness and diversity of the livestock species, differed significantly between the countries and was generally higher in Mongolia. Supplementary feedstuff and pesticide and fertiliser use were higher in China, along with diversification of produces. Our analysis indicates that until very recently the livelihood strategies on both sides of the border were the same, manifesting in the fact that we can define three identical clusters across countries (environment factor) even though there are slight differences in land, livestock and asset endowment.