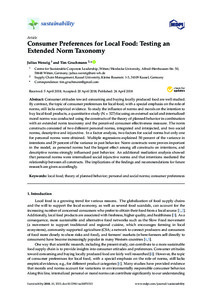 Consumer attitudes toward consuming and buying locally produced food are well studied. By contrast, the topic of consumer preferences for local food, with a special emphasis on the role of norms, still lacks empirical evidence. To study the influence of norms and morals on the intention to buy local food products, a quantitative study (N = 327) focusing on external social and internalized moral norms was conducted using the constructs of the theory of planned behavior in combination with an extended norm taxonomy and the perceived consumer effectiveness measure. The norm constructs consisted of two different personal norms, integrated and introjected, and two social norms, descriptive and injunctive. In a factor analysis, two factors for social norms but only one for personal norms were obtained. Multiple regressions explained 50 percent of the variance in intentions and 29 percent of the variance in past behavior. Norm constructs were proven important in the model, as personal norms had the largest effect among all constructs on intentions, and descriptive norms strongly influenced past behavior. An additional mediation analysis showed that personal norms were internalized social injunctive norms and that intentions mediated the relationship between all constructs. The implications of the findings and recommendations for future research are given accordingly.