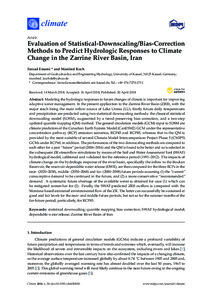 Modeling the hydrologic responses to future changes of climate is important for improving adaptive water management. In the present application to the Zarrine River Basin (ZRB), with the major reach being the main inflow source of Lake Urmia (LU), firstly future daily temperatures and precipitation are predicted using two statistical downscaling methods: the classical statistical downscaling model (SDSM), augmented by a trend-preserving bias correction, and a two-step updated quantile mapping (QM) method. The general circulation models (GCM) input to SDSM are climate predictors of the Canadian Earth System Model (CanESM2) GCM under the representative concentration pathway (RCP) emission scenarios, RCP45 and RCP85, whereas that to the QM is provided by the most suitable of several Climate Model Intercomparison Project Phase 5 (CMIP5) GCMs under RCP60, in addition. The performances of the two downscaling methods are compared to each other for a past “future” period (2006–2016) and the QM is found to be better and so is selected in the subsequent ZR streamflow simulations by means of the Soil and Water Assessment Tool (SWAT) hydrological model, calibrated and validated for the reference period (1991–2012). The impacts of climate change on the hydrologic response of the river basin, specifically the inflow to the Boukan Reservoir, the reservoir-dependable water release (DWR), are then compared for the three RCPs in the near- (2020–2038), middle- (2050–2068) and far- (2080–2098) future periods assuming (1) the “current” consumptive demand to be continued in the future, and (2) a more conservative “recommended” demand. A systematic future shortage of the available water is obtained for case (1) which can be mitigated somewhat for (2). Finally, the SWAT-predicted ZRB outflow is compared with the Montana-based estimated environmental flow of the ZR. The latter can successfully be sustained at good and fair levels for the near- and middle-future periods, but not so for the summer months of the far-future period, particularly, for RCP85.