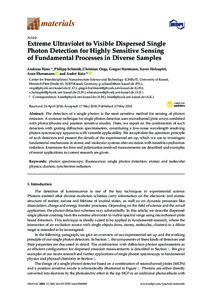 The detection of a single photon is the most sensitive method for sensing of photon emission. A common technique for single photon detection uses microchannel plate arrays combined with photocathodes and position sensitive anodes. Here, we report on the combination of such detectors with grating diffraction spectrometers, constituting a low-noise wavelength resolving photon spectroscopy apparatus with versatile applicability. We recapitulate the operation principle of such detectors and present the details of the experimental set-up, which we use to investigate fundamental mechanisms in atomic and molecular systems after excitation with tuneable synchrotron radiation. Extensions for time and polarization resolved measurements are described and examples of recent applications in current research are given.