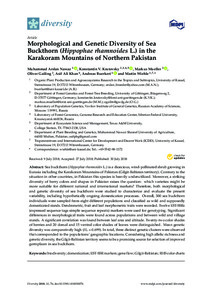 Sea buckthorn (Hippophae rhamnoides L.) is a dioecious, wind-pollinated shrub growing in Eurasia including the Karakoram Mountains of Pakistan (Gilgit-Baltistan territory). Contrary to the situation in other countries, in Pakistan this species is heavily underutilized. Moreover, a striking diversity of berry colors and shapes in Pakistan raises the question: which varieties might be more suitable for different national and international markets? Therefore, both morphological and genetic diversity of sea buckthorn were studied to characterize and evaluate the present variability, including hypothetically ongoing domestication processes. Overall, 300 sea buckthorn individuals were sampled from eight different populations and classified as wild and supposedly domesticated stands. Dendrometric, fruit and leaf morphometric traits were recorded. Twelve EST-SSRs (expressed sequence tags-simple sequence repeats) markers were used for genotyping. Significant differences in morphological traits were found across populations and between wild and village stands. A significant correlation was found between leaf area and altitude. Twenty-two color shades of berries and 20 dorsal and 15 ventral color shades of leaves were distinguished. Mean genetic diversity was comparatively high (He = 0.699). In total, three distinct genetic clusters were observed that corresponded to the populations’ geographic locations. Considering high allelic richness and genetic diversity, the Gilgit-Baltistan territory seems to be a promising source for selection of improved germplasm in sea buckthorn.