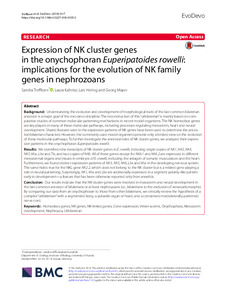 Expression of NK cluster genes in the onychophoran Euperipatoides rowelli: implications for the evolution of NK family genes in nephrozoans

Understanding the evolution and development of morphological traits of the last common bilaterian ancestor is a major goal of the evo-devo discipline. The reconstruction of this “urbilaterian” is mainly based on comparative studies of common molecular patterning mechanisms in recent model organisms. The NK homeobox genes are key players in many of these molecular pathways, including processes regulating mesoderm, heart and neural development. Shared features seen in the expression patterns of NK genes have been used to determine the ancestral bilaterian characters. However, the commonly used model organisms provide only a limited view on the evolution of these molecular pathways. To further investigate the ancestral roles of NK cluster genes, we analyzed their expression patterns in the onychophoran Euperipatoides rowelli.
Results:

We identified nine transcripts of NK cluster genes in E. rowelli, including single copies of NK1, NK3, NK4, NK5, Msx, Lbx and Tlx, and two copies of NK6. All of these genes except for NK6.1 and NK6.2 are expressed in different mesodermal organs and tissues in embryos of E. rowelli, including the anlagen of somatic musculature and the heart. Furthermore, we found distinct expression patterns of NK3, NK5, NK6, Lbx and Msx in the developing nervous system. The same holds true for the NKL gene NK2.2, which does not belong to the NK cluster but is a related gene playing a role in neural patterning. Surprisingly, NK1, Msx and Lbx are additionally expressed in a segment polarity-like pattern early in development—a feature that has been otherwise reported only from annelids.
Conclusion:

Our results indicate that the NK cluster genes were involved in mesoderm and neural development in the last common ancestor of bilaterians or at least nephrozoans (i.e., bilaterians to the exclusion of xenacoelomorphs). By comparing our data from an onychophoran to those from other bilaterians, we critically review the hypothesis of a complex “urbilaterian” with a segmented body, a pulsatile organ or heart, and a condensed mediolaterally patterned nerve cord.