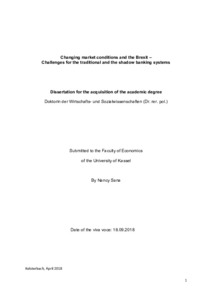 Following the financial crisis of 2008/2009, the framework conditions for the financial sector, especially for banks and insurance companies in the Euro and US regions, have changed significantly. Banks and insurance companies in the Euro zone and the US are facing increasing regulatory requirements such as the Dodd Frank Act in the US and Basel II and III in the Euro zone. In addition, the environment for American and European banks and insurance companies has increasingly changed over the last few years as a result of the low-interest phases initiated by the central banks and massive bond purchases. However, low-interest phases are not a new phenomenon; Japanese banks and insurance companies have been operating in such an environment since the 1990s. They have met the associated challenges by changing their business models and mergers. Due to the low level of interest rates that has persisted for years since the crisis, European and American banks and insurance companies are now also facing these challenges in their respective core business areas, the lending and deposit business for banks and premium and investment business for insurance companies.
Despite similar starting conditions and business environment, American and European banks developed in different directions after 2009. The reasons for this are e.g. the development of interest margins, bank costs as well as risk provisions and value adjustments. After the crisis, US banks in some cases made value adjustments more than twice as high as in the Euro zone.
For many European banks this is still lying ahead. In future the profitability of European banks will also be burdened by increased capital requirements and low interest rates.
Low interest rates and increased regulatory requirements are putting pressure not only on banks, but also on premium income and investment returns of insurers.
The low level of interest rates is increasingly forcing banks and insurance companies to act. In order to counteract these developments, banks and insurance companies are trying not only to tap new sources of income but also to divest themselves of business areas or to thin out their branch networks. Will shadow banks take over these business areas in the future?
The shadow bank sector has grown steadily over the past few years. While SPVs are declining in some countries, the fund sector is growing continuously. In this context, this paper analyses the extent to which the monetary policy environment, especially in the USA but also in Europe, is stimulating this development. Investors looking for higher returns are investing in the shadow banking sector.
The growth driven by the business environment will become a problem in the future, as the shadow banking sector, unlike the traditional banking sector, is insufficiently regulated, which increases the risk of a renewed crisis. The financial crisis has shown that the risks of the shadow banking sector, e.g. from SPVs, can easily be transferred to the traditional banking and insurance sectors. But it is not only the developments in the traditional and shadow banking sector that give cause for concern about a renewed crisis, but also those in the credit and real estate markets. In the US, the UK and Europe, the real estate and credit markets are in some cases strongly fueled. The Brexit is just around the corner in the UK. Is after the crisis before the next? A first indication of such an assumption are the numerous closures of British real estate funds and downward corrections in the British real estate market following the Brexit vote. These movements in the markets reflect the fear of a possible abrupt end to the years of speculative and foreign investor-driven boom in the UK real estate market as a result of the Brexit vote.
Sentiment factors were used to capture market sentiment in the financial markets after the Brexit vote. These show a clouding of sentiment also on the real estate markets after the Brexit vote, which is reflected in downward movements in the financial markets. Hedge funds which are sensitive to the financial markets, could use this downward movement and mood to strengthen the market development on the British real estate market.
Will we experience a financial crisis this time from the British rather than the US real estate market, or will the British real estate market simply cool down and correct itself?