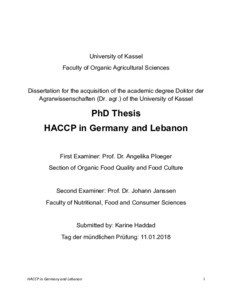 HACCP in Germany and Lebanon

Food borne outbreaks have been on the rise in Lebanon and in Germany in recent years. Food safety systems have been developed over a period of years starting from HACCP which was established in the 1950’s unto the European directive 93/43/EEC established in 1993, to directive (EC) No 178/2002 until today in order to prevent and control hazards in the different food safety fields. Such systems which started with HACCP (hazard analysis and critical control point) and was later integrated into private systems such as ISO 22000:2005 and then into regulations such as (EC) No 852/2004 and others. In spite of the emergence of these systems, foodborne illnesses continue to occur. This study investigates the application of HACCP based systems in selected food industries and through certain consultants, auditors and inspectors in Germany and Lebanon in light of the continuous food borne outbreaks.
The study addresses the positive and negative factors influencing the application of HACCP among food experts. The methods used are inductive qualitative methods. They comprise of primary outbreak analysis in the world, standards and regulation comparison, leading to thorough qualitative interviews in both countries inquiring the understanding and perception of HACCP principles with food safety experts. Food experts were chosen from different fields such as quality control managers, plant managers, raw material suppliers, university professors, consultants, auditors and government inspectors in Lebanon and Germany. The questions focused on the knowledge and the understanding that the experts had on Codex (2003) and the other systems and regulations.
The results show that the application of HACCP in those areas was not always implemented according to the Codex standard in all the HACCP steps. The areas mostly affected were: flow diagrams, hazard analysis, critical control points and validation. The roles of the HACCP team, consultants, auditors and governmental inspectors were investigated as well and revealed to have a huge influence on the common trends and misinterpretations found.
Overall, there was no country difference in terms of understanding and perception but the dynamics differed depending on the role of the government and advising experts in each country. A risk-based approach is not always used in food safety systems, rather the approach is influenced by what the consultants or the auditors request. Not all governmental bodies were up to date with all recent standards of food safety and guidelines, much like consultants and auditors had interpretations based on personal understanding of HACCP. Harmonization among standards, regulations and trainings is a step that is needed towards solving the paradox of the rise of food borne illnesses and the increasing amount of standards.