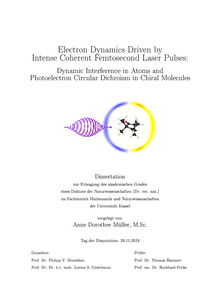 Since humans have begun to explore nature, they came up with new ways and tools, which
have been permanently improved. At some point, those tools allowed to look into the
microworld and to study the quantum nature of matter. One of such tools to explore the
quantum world is the light amplification by stimulated emission of radiation (laser). Since the
first lasers were built almost 60 years ago, their capabilities improved permanently, allowing
the study of hitherto-unknown physical phenomena. Two of such phenomena, the dynamic
interference and the multiphoton photoelectron circular dichroism (PECD), are the subjects of
the present theoretical work.

The dynamic interference appears when matter is exposed to intense coherent laser pulses.
It is an analogy of the double-slit experiment in time, when two photoelectron wave packets
of the same kinetic energy emitted at different moments in time along the pulse superimpose.
The resulting interference patterns in the electron spectra are well understood theoretically,
but an experimental verification of this effect is still absent. In this work, two open tasks
relevant for the theoretical description of the dynamic interference are studied. The first task
is to investigate the dynamic interference for systems, which are amenable to experiments at
modern laser facilities. The second task is to reinvestigate available theoretical results, which
were obtained with simple models, by numerically exact methods. For this purpose, a new
method, the time-dependent single center method (TDSC), was developed and tested as a
part of this work.

The TDSC method solves the time-dependent Schrödinger equation in spherical coordinates
for single-active-electron or two-electron wave packets driven in an ionic potential by a laser
pulse. It is also used in this work to study the multiphoton PECD in the electron spectra of
chiral molecules in the single-active-electron approximation. The PECD is the difference of
the angular emission distributions of electrons emitted by chiral molecules ionized by right-
and left-handed circularly polarized light, and it consists in the forward/backward asymmetry
in the photoelectron emission. The PECD is extensively studied in the one-photon ionization
regime, both, experimentally and theoretically. For the multiphoton ionization, many new
experiments are available, but a reliable quantitative theoretical interpretation of those
observations is still missing. In order to explain available experimental results, in this work,
the TDSC method is first tested on the model methane-like chiral system and then applied to
study the three- and four-photon PECD in real chiral molecules Camphor and Fenchone.