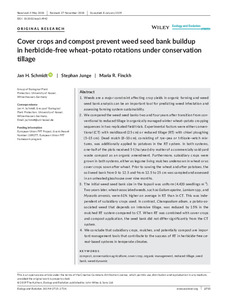 Weeds are a major constraint affecting crop yields in organic farming and weed seed bank analysis can be an important tool for predicting weed infestation and assessing farming system sustainability.
We compared the weed seed banks two and four years after transition from conventional to reduced tillage in organically managed winter wheat–potato cropping sequences in two replicated field trials. Experimental factors were either conventional (CT) with moldboard (25 cm) or reduced tillage (RT) with chisel ploughing (5–15 cm). Dead mulch (8–10 cm), consisting of rye–pea or triticale–vetch mixtures, was additionally applied to potatoes in the RT system. In both systems, one‐half of the plots received 5 t (ha/year) dry matter of a commercially sold yard waste compost as an organic amendment. Furthermore, subsidiary crops were grown in both systems, either as legume living mulches undersown in wheat or as cover crops sown after wheat. Prior to sowing the wheat and after potatoes, the soil seed bank from 0 to 12.5 and from 12.5 to 25 cm was sampled and assessed in an unheated glasshouse over nine months.
The initial weed seed bank size in the topsoil was uniform (4,420 seedlings m−2). Two years later, wheat‐associated weeds, such as Galium aparine, Lamium spp., and Myosotis arvensis, were 61% higher on average in RT than in CT. This was independent of subsidiary crops used. In contrast, Chenopodium album, a potato‐associated weed that depends on intensive tillage, was reduced by 15% in the mulched RT system compared to CT. When RT was combined with cover crops and compost application, the seed bank did not differ significantly from the CT system.
We conclude that subsidiary crops, mulches, and potentially compost are important management tools that contribute to the success of RT in herbicide‐free cereal‐based systems in temperate climates.