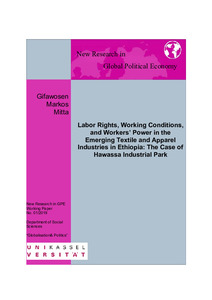 Labor Rights, Working Conditions, and Workers’ Power in the Emerging Textile and Apparel Industries in Ethiopia: The Case of Hawassa Industrial Park

To be able to participate in the global production network and enhance its manufacturing sector, the government of Ethiopia has been building industrial zones (Export Processing Zones) in various parts of the country. These zones have already attracted substantial investments into the country in the light manufacturing sectors, particularly, textile and apparel industries, as a result of which the country is gradually gaining the potential to become a global textile and apparel sourcing hub. Despite the governments’ commitment to attract investments, the emerging manufacturing sector is now being under scrutiny for its abuse of basic workers’ rights and its exploitative wage structure. This study aims to contribute to labor studies in Ethiopia by examining the current state of labor relations in the Hawassa Industrial Park (HIP) and exploring the ways in which workers respond to grievances around their workplaces. The research basically used both primary (interviews) and secondary data and information, and employed the Power Resource Approach as a theoretical model and a qualitative methodology to analyse the data. The study has found out that the workers are being paid appalling wages and working conditions in the industrial park are generally poor. Though labor rights has been consistently compromised at the industrial park, the study revealed that the workers’ grievances in the industrial park are not yet translated into a genuine industrial action due to lack of workers’ structural and organizational power resources and thereby its usage. As a result, the utilization of secondary sources of workers’ power at the factory level has waned. The national level unions are powerless to protect workers’ exploitation at the grassroots level. The research concludes that the combination of government policies fostering a capitalist social relation of production, hostility of employers to labor rights, impotence of the toplevel trade unions, and limited consciousness of the workers at the grassroots level has left the labor with little possibilities to challenge the prevailing employment relations and labor practices in the HIP.