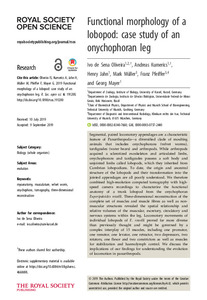 Functional morphology of a lobopod: case study of an onychophoran leg

Segmental, paired locomotory appendages are a characteristic feature of Panarthropoda—a diversified clade of moulting animals that includes onychophorans (velvet worms), tardigrades (water bears) and arthropods. While arthropods acquired a sclerotized exoskeleton and articulated limbs, onychophorans and tardigrades possess a soft body and unjointed limbs called lobopods, which they inherited from Cambrian lobopodians. To date, the origin and ancestral structure of the lobopods and their transformation into the jointed appendages are all poorly understood. We therefore combined high-resolution computed tomography with high-speed camera recordings to characterize the functional anatomy of a trunk lobopod from the onychophoran Euperipatoides rowelli. Three-dimensional reconstruction of the complete set of muscles and muscle fibres as well as non-muscular structures revealed the spatial relationship and relative volumes of the muscular, excretory, circulatory and nervous systems within the leg. Locomotory movements of individual lobopods of E. rowelli proved far more diverse than previously thought and might be governed by a complex interplay of 15 muscles, including one promotor, one remotor, one levator, one retractor, two depressors, two rotators, one flexor and two constrictors as well as muscles for stabilization and haemolymph control. We discuss the implications of our findings for understanding the evolution of locomotion in panarthropods.