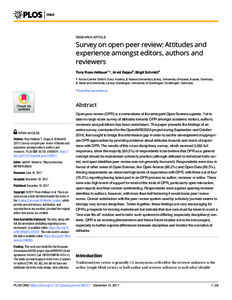 Open peer review (OPR) is a cornerstone of the emergent Open Science agenda. Yet to date no large-scale survey of attitudes towards OPR amongst academic editors, authors, reviewers and publishers has been undertaken. This paper presents the findings of an online survey, conducted for the OpenAIRE2020 project during September and October 2016, that sought to bridge this information gap in order to aid the development of appropriate OPR approaches by providing evidence about attitudes towards and levels of experience with OPR. The results of this cross-disciplinary survey, which received 3,062 full responses, show the majority (60.3%) of respondents to be believe that OPR as a general concept should be mainstream scholarly practice (although attitudes to individual traits varied, and open identities peer review was not generally favoured). Respondents were also in favour of other areas of Open Science, like Open Access (88.2%) and Open Data (80.3%).
Among respondents we observed high levels of experience with OPR, with three out of four (76.2%) reporting having taken part in an OPR process as author, reviewer or editor. There were also high levels of support for most of the traits of OPR, particularly open interaction, open reports and final-version commenting. Respondents were against opening reviewer identities to authors, however, with more than half believing it would make peer review worse. Overall satisfaction with the peer review system used by scholarly journals seems to strongly vary across disciplines. Taken together, these findings are very encouraging for OPR's prospects for moving mainstream but indicate that due care must be taken to avoid a "one-size fits all" solution and to tailor such systems to differing (especially disciplinary) contexts.
OPR is an evolving phenomenon and hence future studies are to be encouraged, especially to further explore differences between disciplines and monitor the evolution of attitudes.

This work was funded by the European Commission H2020 project OpenAIRE2020 (Grant agreement: 643410, Call: H2020-EINFRA-2014-1). The funder provided support in the form of salaries for authors [TRH, AD, BS], but did not have any additional role in the study design, data collection and analysis, decision to publish, or preparation of the manuscript. The specific roles of these authors are articulated in the `author contributions' section. Please note that the author contributions as listed in the paper are incomplete, owing to a data entry error. The correct information regarding contributions is as follows: - Tony Ross-Hellauer (ORCID 0000-0003-4470-7027): Conceptualization, Data curation, Formal analysis, Investigation, Methodology, Project Administration, Resources, Supervision, Validation, Writing – original draft, Writing – review & editing - Arvid Deppe (ORCID 0000-0001-7190-9535): Conceptualization, Data curation, Investigation, Methodology, Project administration, Resources, Writing – review & editing - Birgit Schmidt (ORCID 0000-0001-8036-5859): Conceptualization, Data curation, Formal analysis, Funding acquisition, Supervision, Validation, Visualization, Writing – original draft, Writing – review & editing Competing interests: This work was conducted as part of the OpenAIRE2020 project, an EC-funded initiative to implement and monitor Open Access and Open Science policies in Europe and beyond. The lead author recently joined Know-Center GmbH, Graz, Austria. The Know-Center is funded within the Austrian COMET program – Competence Centers for Excellent Technologies - under the auspices of the Austrian Federal Ministry of Transport, Innovation and Technology, the Austrian Federal Ministry of Economy, Family and Youth, and the State of Styria. COMET is managed by the Austrian Research Promotion Agency FFG. This new commercial affiliation does not alter the authors' adherence to PLOS ONE policies on sharing data and materials.
European Commission H2020 - OpenAIRE2020 - Open Access Infrastructure for Research in Europe 2020 (Grant agreement: 643410)