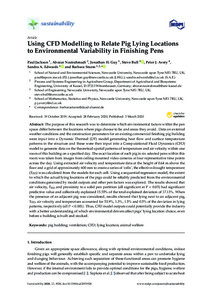 The purpose of this research was to determine which environmental factors within the pen space differ between the locations where pigs choose to lie and areas they avoid. Data on external weather engconditions and the construction parameters for an existing commercial finishing pig building were input into a Dynamic Thermal (DT) model generating heat flow and surface temperature patterns in the structure and these were then input into a Computational Fluid Dynamics (CFD) model to generate data on the theoretical spatial patterns of temperature and air velocity within one room of this building on a specified day. The exact location of each pig in six selected pens within this room was taken from images from ceiling-mounted video cameras at four representative time points across the day. Using extracted air velocity and temperature data at the height of 0.64 m above the floor and a grid of approximately 600 mm to create a series of ‘cells’, the effective draught temperature (TED) was calculated from the models for each cell. Using a sequential regression model, the extent to which the actual lying locations of the pigs could be reliably predicted from the environmental conditions generated by model outputs and other pen factors was explored. The results showed that air velocity, TED and proximity to a solid pen partition (all significant at P < 0.05) had significant predictive value and collectively explained 15.55% of the total explained deviation of 17.13%. When the presence of an adjacent pig was considered, results showed that lying next to an adjacent pig, TED, air velocity and temperature accounted for 53.9%, 1.3%, 1.5% and 0.5% of the deviation in lying patterns, respectively (all P < 0.001). Thus, CFD model outputs could potentially provide the industry with a better understanding of which environmental drivers affect pigs’ lying location choice, even before a building is built and stocked.