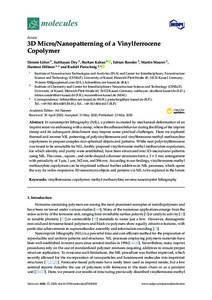 In nanoimprint lithography (NIL), a pattern is created by mechanical deformation of an imprint resist via embossing with a stamp, where the adhesion behavior during the filling of the imprint stamp and its subsequent detachment may impose some practical challenges. Here we explored thermal and reverse NIL patterning of polyvinylferrocene and vinylferrocene-methyl methacrylate copolymers to prepare complex non-spherical objects and patterns. While neat polyvinylferrocene was found to be unsuitable for NIL, freshly-prepared vinylferrocene-methyl methacrylate copolymers, for which identity and purity were established, have been structured into 3D-micro/nano-patterns using NIL. The cross-, square-, and circle-shaped columnar structures form a 3 × 3 mm arrangement with periodicity of 3 µm, 1 µm, 542 nm, and 506 nm. According to our findings, vinylferrocene-methyl methacrylate copolymers can be imprinted without further additives in NIL processes, which opens the way for redox-responsive 3D-nano/micro-objects and patterns via NIL to be explored in the future.