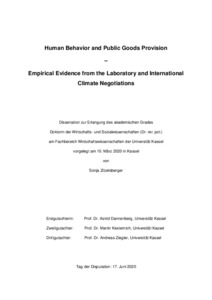 This thesis comprises an introductory chapter followed by four distinct but connected articles. The common thread is the quest to understand human behavior in the provision of public goods and how this behavior is impacted by institutional and situational factors. The main body of the thesis can be divided into two thematic parts with two articles each.
Part 1 focuses on the international climate negotiations as a platform for international cooperation. The two articles in this part, presented in Chapter 2 and 3, build upon a comprehensive survey of climate negotiators and climate scientists. The article in Chapter 2, titled Climate negotiators’ and scientists’ assessments of the climate negotiations, analyses their perceived success of the climate negotiations and shows that individuals who were more involved in the negotiation process tended to be more optimistic in their assessment of the process. The article in Chapter 3, titled Climate experts’ views on geoengineering depend on their beliefs about climate change impacts, investigates the opinion on solar geoengineering, a controversial measure to counter global warming. The article finds that the degree of support is positively correlated with expected future damages from climate change in the respondent’s home country, but negatively correlated with expected future global damages. The results of both articles show that individual characteristics affect attitudes and behavior even in professional contexts with high stakes.
Part 2 comprises two papers that add to the fundamental research on public good provision. These articles are presented in Chapter 4 and 5 and investigate the effect of institutional settings in laboratory public goods games. The focus here is on mechanisms that can be implemented in the absence of a central authority. The article in Chapter 4, titled Voting on the threat of exclusion in a public goods experiment, presents results from an experiment in which groups can choose to implement an exclusion institution. The article in Chapter 5, titled Asymmetric heterogeneities and the role of transfers in a public goods experiment, investigates the effect of voluntary unconditional resource with asymmetric heterogeneities in endowment and productivity. The results highlight that the institutional mechanisms tested work well to increase cooperation if they are used, but also have potential drawbacks if they are not used.